TECHNOLOGY, INCRESINGLY PRESENT IN OUR STUDENTS 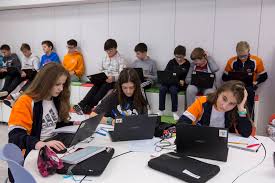 A survey made of students between teenagers of 14, 15, and 16 years old in La Compasión Escolapios shows that almost 90% of them like technology. Most of them had their first mobile phone at 12 years old. Among students, the most used app is Instagram and Netflix.

Talking about social networks, most students have between 300 and 500 followers on their social networking sites. Other data to highlight: more than half of the students have made a good friend through social media. These figures were surprising because they are well informed about the riskiness of the social network in this type of case. Another worrying data is that one-third of students feel upset or nervous when their phone’s battery finishes.

What is more, 63% of them have a friend who is hooked! The majority of them stop using their mobile phone at eleven or twelve PM, and one in every ten uses the mobile phone later than one in the night. Also, half of them go to sleep with it.